It began a few decades ago, the widespread presence of ghouls come from the advent of a strange and powerful drug called shroud, a cure-all remedy. Of course shroud have a dramatic (possible) side-effect. After the drug-induced coma that shroud-ingesting automatically provokes, most users are simply healed of all ailments that were afflicting them, but for some unlucky souls… a terrible transformation occurs!

The firsts of these ghouls were hunted down to stop their cannibalistic rampages. But soon after, a celebrated druggist, whose son had become such a grisly creature, managed to create yet another drug that could alleviate the worst of the « ghoulish condition ». The ghouls that are taking this now famous tincture, are known as « pacified ghouls » (as opposed to feral ghouls) and can get on with their lives (not so easy) without having the « sinister urges ». As long as they take the tincture, that is. 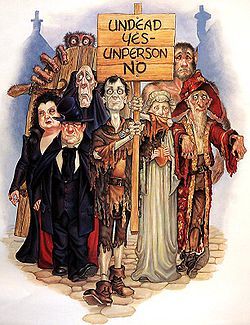 Shroud is still widely consumed. Being relatively cheap and so very efficient, many sick people have no choice but to take the risk… That’s why there’s so many ghouls around. 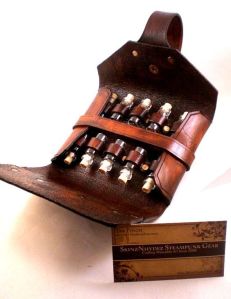 Usually, those taking the tincture took it first while the symptoms of transformation (1d4 days) occurred. One could possibly take it after the transformation, but not willingly (1). Thereafter a pacified ghoul have to take a dose everyday or else become increasingly feral (1d4 days again). This is financially burdening (2) but it’s the only way to keep control over itself.

Elves are never transformed into ghouls. Nor are Goblins and Dwarves . Halflings, Hobgoblins, Humans and Tieflings can all be transformed after having been unlucky with Shroud consumption. Some traits of their former appearance can still be seen but they’re clearly more « ghoulish » than anything else.

Eating spoiled humanish meat is very satisfying for a ghoul, even for one controlling its condition with the Tincture. Such a meal gives a HD back (not the hit points, unless spending it with a short rest) but a horrible stench follows the glutton for a day (disadvantage on persuasion).