On ruthless streets, on by-ways sad with sin,
(Half-hated by the blinded ones you guard)
Guard well, lest crime unheeded enter in!
The dark is cruel and the vigil hard.
The hours of guilt begin.
To all, alert and faithful in the night,
May there be Light!

There’s not much lighting at night in the city except for a few fortunate areas. The night is dark for almost everybody and it’s at that time that the vilest of both criminals and creatures are lurking (1). 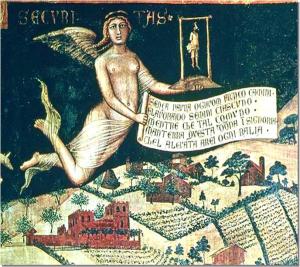 The oath of security

The  lantern bearing paladin is not a crime fighter per se, but he can and does intervene (if he happens to stumble on a mugging, for example). However, its first duty is to repel or exterminate the creeping horrors that are hidden in the dark corners of the city. Such creatures may have been summoned by a mad warlock, or have crept from the catacombs under the city or may have entered surreptitiously by some unprotected and hidden entrance that smugglers use or any other means. What’s important is that they mustn’t be allowed their rampages.

Nowadays, the nights are more dangerous than ever. The Order of Securitas is too understaffed to be everywhere. Worst, many gangs don’t take kindly to letting someone roam their streets, even if it’s for hunting lurking horrors. These conditions take their tolls and many watchmen are sleep-deprived and emotionally unstable, if not worst.

More of a monster hunter, less an exemplary leader, so charisma is out (see below).

ability modifier is wisdom instead of charisma.

Turn the unholy ability replaced by Turn creatures of the dark, whoever or whatever have darkvision (that is active) may be affected by it.

Cantrip: Light (must have a lantern (spellcasting focus) to cast it, doesn’t need fuel)