A few weeks ago I tried MtG for the first time. I’d never played in my youth (it seems like you choose either tabletop gaming or card gaming, rarely both). My good friend, who was nostalgic about his own gaming past, introduced me to this famous money pit (what a friend hey!). He taught me the basics and we had time to play twice The first time, and most interesting from my pov, was with bare-minimum dominaria decks.

I had a black and green deck, with not much going on with the notable exception of FUNGUS!

Here’s some cards I had: 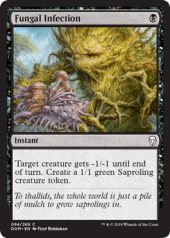 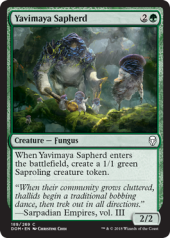 That sufficed to make me like the game as I’ve been quite fascinated by anything mycology-related for a while now. In fiction, since I read the Ambergris books from Jeff Vandermeer and before that in gastronomy, when my wife and I became wild mushrooms enthusiasts.

The M:tG Thallids (how the fungus creatures are called) seems to have much more impactful art and concepts than their D&D Myconids counterpart and I will certainly steal a few things for my Ruins of Chult campaign!