Short session. Sadly, both my brother and sister couldn’t make it. That changed my plans. That, and we started awfully late. It is what it is…

Corpos and Lucky were recuperating from their previous ordeals inside the ruined Camp Righteous when a supply convoy heading to Camp Vengeance made a quick stop. They were happy to see Phileas disembark to join them. The half-elf was spying on the Pick & Axe Company and had a few intel bits to share.

Also, Corpos, anticipating the difficulties ahead, managed to hire a fearsome-looking Chultan named Goro-T’so (1) with promises of gold and tej.

As to be expected in Batiri territory, the PCs saw that they were tailed by goblin hunters, with trained velociraptors. 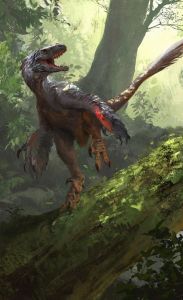 With Tymora’s opportune help, Lucky managed to spot more batiri ambushers further ahead. Acting on this knowledge the PCs started the hostilities before the trap could be fully sprung on them.  A well-placed Sleep  from the Elf wizard put the small but ferocious velociraptors out of combat early on. The bard charged one of the raptors’ handlers while Goro-T’so went the other way to attack 4 Batiri archers, with Lucky firing his crossbow at them too.

The Chultan hireling got severely wounded but he also skewered 2 Batiri, with Lucky finishing a third. The fourth managed to flee. Phileas dodged several poisoned arrows and killed 2 more Batiris with the help of Corpos flinging spells from behind.

Corpos, after the fight, decided to keep one velociraptor (tied up) with the idea to try to befriend the diminutive dinosaur with time.

The PCs walked at a brisk pace, wishing to put distance from themselves and a tree platform batiri village they had spotted after their skirmish. A few hours later they saw an unusual sight, a man, or what looked like a man anyway, was hanged by the feet, some 10′ in the air. Closing in, with a horrible stench now assailing them, they could see that the man was in fact a ghoul!

The undead creature, a non-chultan male, immediately started to plead with them to let it go, offering information in exchange of its freedom.

After some back-and-forth (2), the ghoul, going with the name of Scavo, revealed many things:

The PCs finally cut the rope and let him go, suggesting that he could make himself useful and eat some goblins nearby…