The Hidden Shrine of Tamoachan in Chult

Disclaimer: This play report is my own take on The Hidden Shrine of Tamoachan (the 5e version from TofYP). Lots of spoilers below but it’s not  a “standard” playthrough of this classic module by any margin. First of all, I didn’t make them fall into the dungeon as is supposed to happen if you play as intended. And at the end, they meet Zotzilaha, which also isn’t included in the module… That’s the two big things, the remainder of my changes are more esthetic in nature.

Shin, Kalohan, Corpos and Phileas had been at the site for many days, collecting clues while evading Batiri patrols when Flyzus and Rufb unexpectedly joined them for the venture. As for Lucky, he had left, having received a disquieting omen from his goddess Tymora.

The Tabaxi had climbed down through the large hole in the ground, next to the Shield Guardian. The automaton’s master, a wizard northerner, had fallen to his death and his body laid broken at the bottom. Fortunately, Shin found  the amulet that controlled the construct and it was still intact. He also found the wizard’s spellbook, a decent amount of gold and some exploration gears. A quick inspection of the room below revealed a locked door and many statuettes that evoked meaningful scenes from this lost civilization. The PCs looked for another entry.

Beware Defilers! Your Genitals Will Shrivel and Fall Off

Atop the impressive ziggurat stood a temple dedicated to the cult of a scary demon-bat thing/god/mighty Jungle Spirit: Zotzilaha. Inside the half-collapsed temple, a trapdoor was visible, but glyphs on it indicated that a powerful curse would befall any would-be defilers that entered that way. The PCs also found out a hole inside the mouth of a statue of Zotzilaha. It certainly looked like a trap. They resolved the matter with their first use of the Shield Guardian as Shin ordered it to grab whatever was inside the hole (a lever). The statue’s jaws did close on the construct’s arm but to no great effect (3). This revealed another entry, one apparently safe of curse… 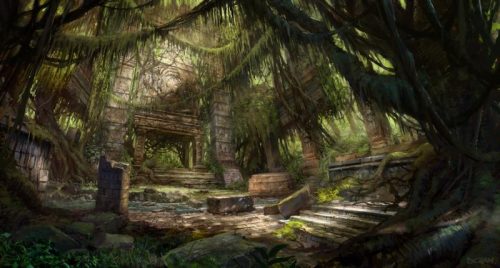 After going down the stairway and taking a few turns and removing a block of basalt (put in a way so it fell on invaders), the PCs, accompanied by Vorn, entered a large room with a fearsome tomb guardian on the central dais: a Crocodile Mummy (5). 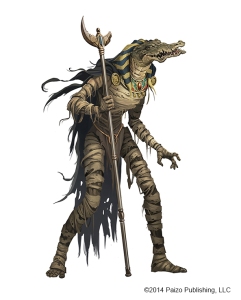 The creature proved hard to slay (6) but they eventually prevailed, with the opportune help of the powerful Shield Guardian (7). Flyzus was bitten in the course of the fight and he could feel that something was very wrong with his wound… The PCs looted some urns in the back and found some trinkets.

In the next room, three fountains could be seen, one still had water, one was filled with grime and the other cracked and empty. Rufb took the mummy’s pike to search through the grime and managed to fish out a chain with a platinum key.

Approaching the water-filled fountain incited the resident Water Weird to attack. It pummeled Rufb and tried to pull him under the water but the strong Barbarian resisted the attempt easily. Yet again, the Ranger was inefficient with his (non-magic slashing) attacks but the combined might of the party still proved more than enough, splashing the walls with the Water Weird (8).

The empty fountain could be slid, revealing a vertical shaft going deeper into the ziggurat.

And down they went.

Rufb, descending first (9), put a foot on something sticky: spider webbing. A mere second later, a Giant Spider got out of its lair. It would have attacked Rufb – he would have had a hard time defending in such a narrow space – but for the timely intervention of Shin. Using his Hat of the Spider, the latter convinced the Giant Spider to let them pass and so, they all got on the next tier without further complications.

One thought on “Session 14a – The Hidden Shrine”