We’ve defeated the third Evil Ninja Boss in an epic mecha fight. The ENB used a giant serpent-robot that threathened to crush us in its coils but we had the perfect counter, with our patented hedgehog defense!

The next ENB can be found in a hotel (I think Isaac has only a vague idea of what is an hotel ha! ha!) and has a peculiar “power”, his left arm is mechanical and he can remove his thumb, which is in fact a mini-bomb, so that he can throw it and blast his enemies!

But NukeThumb-Guy, after we’ve killed all his minions, doesn’t go nuclear on us but choose instead to parley.

How about One million dollars to let him live? 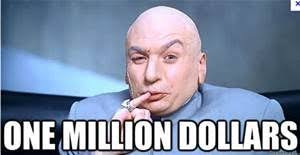 Not too bad for a day’s work, my corruptible son, not too bad…